I make #Starscan, a #FOSS game.

Follows welcome. If we don't know each other and you want to debate or argue, make sure I'm into that first.

When Hugo works it's great...

I'm taking the week off with my wife to do, *checks notes*, "ignorant shit" and I've never been so excited.

Might play some Elder Scrolls: Online today. Wanna gear up for a trial or something.

Also might play some Apex or No Man's Sky VR. As I am wont to do.

minor annoyance at WSL2 not having good support for file system change notification. 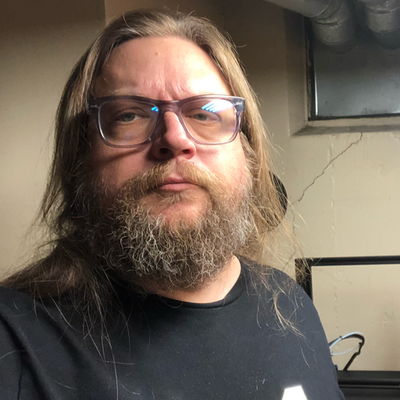 It is finally dawning on me what has changed:

Developers today, by using GitHub and global distribution hubs like npm, are open source developers by default. There is no intentionality behind the decision to release code, it is simply what is done.

Contrast to earlier times, when choosing a license and making code available for download (anonymous FTP, anyone?) was much more than a one-click affair. One had to decide to license their code and go to some effort to publish it to the internet. Perhaps some thought would even be dedicated to considering the consequences of releasing code.

It seems as though we've arrived at a form of unprincipled open source.

Whenever I see WEB 3 I immediately remember SSL 3.

Amazon just suggested I buy a wifi deauther watch for my wife.

My non-tech day dream is a large pecan orchard with bees and a rescue for industrial farm animals.

Running the long con of trying to stay positive about a career opportunity while preparing myself for what I'll start doing if it doesn't pan out.

Kind of excited to have that stuff behind me so I can resume pushing toward my pentest+ and my cysa+. Might dive into malware analysis head first too. Might just become a cactus farmer. I dunno.

I'm expecting to hear back next week.

I like cacti. So I have that going for me! “If machines produce everything we need, the outcome will depend on how things are distributed. Everyone can enjoy a life of luxurious leisure if the machine-produced wealth is shared, or most people can end up miserably poor if the machine-owners successfully lobby against wealth redistribution. So far, the trend seems to be toward the second option, with technology driving ever-increasing inequality.”
https://np.reddit.com/user/Prof-Stephen-Hawking

The sun this morning is peeking over the wall of mesquite, a halo on the distant palm trees. The morning is cool this time of year. The birds are restless. I am alive.

That's not a complaint, just an amusement

Lmao You know what doesn't make any sense without context? Wordle.

Never fear! I is here!

Time to make like an IRIX machine and crash. Good night, y'all.

I'm really enjoying the ongoing absurdity of Cobra Kai. I love that they gave Johnny a hero arc without taking away his relative villainy.

The Town is quiet, tonight.

So what is everyone up to this evening?

I make #Starscan, a #FOSS game.

Follows welcome. If we don't know each other and you want to debate or argue, make sure I'm into that first.